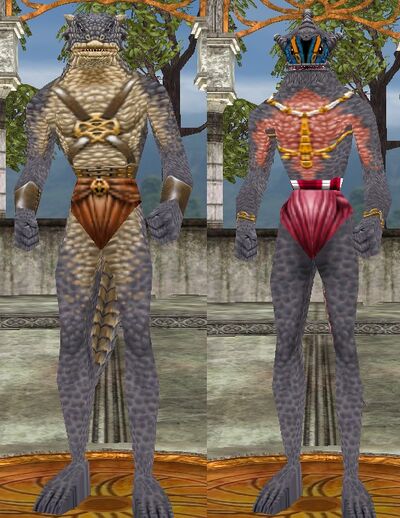 The fearsome and savage reptilian race on Norrath is known as the Iksar. With their significant height, scales, and long tails, Iksar are intimidating in their appearance. Their reptilian physiology grants them a natural affinity for water, as well as enhanced regeneration.

Their entire civilization developed in isolation for centuries and fostered an unusual culture. The Iksar are a tribal race with a very simple social structure. Allies to no one, the Iksar are intelligent and proud. Having seen their race crumble through the toils of war, the race has become bitter about its loss of power. After being slaves and warring with the Ring of Scale, they were nearly made extinct.

The Iksar live in the ancient city of Cabilis, on Kunark near the Lake of Ill Omen. It is a dark place with a maze of canals, which the Iksar use for travel around their city.