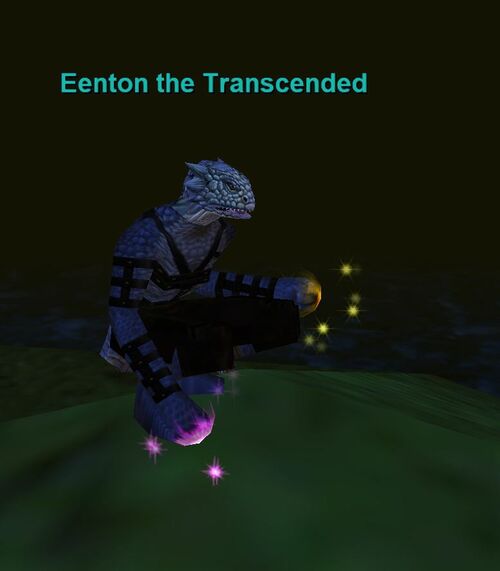 Eenton the Transcended is one Kerafyrm's Ancients and Captain. He is a furiously fast monk who will probably be the most difficult fight for guilds to master. He makes tanks feel like they have no gear and really puts healers to the test.

Eenton the Transcended says, "Leave me to my meditation mortal. Not all [Ancients] partake in the petty [bickering] that the others do."

Eenton the Transcended says, "Yes, the Ancients. Surely you are not this dense. We are the followers of Kerafyrm, the rebels who caused the uprising and war between the Ring of Scale and the Claws of Veeshan. I am one of Kerafyrm's captains. While I support him completely, that does not mean I came here to interfere with mortal life. My fight is with the Claws of Veeshan. I simply wish to meditate until that [time] comes."

Eenton the Transcended says, "Braag sent several of his captains to Norrath to corrupt and empower many creatures to cause chaos. That chaos would hopefully prove to draw the attention of Veeshan and her interference would weaken her resistance against our rebellion."

Eenton the Transcended says, "I see you are insistant on ruining my day. Let's get this over with."

Eenton the Transcended attacks you...

Eenton makes use of two primary abilities. First he shatters the armor of the tank, causing them to mitigate much less damage. With Eenton's relentless attacks your tanks will be getting minced. Second, he randomly does an AOE Whirlwind kick which damages everyone around him (a bit longer range than melee).

Phase 1 is mainly about understanding and managing how you deal with Eenton's AOE. While he doesn't hit hard, he hits very fast, quads, and flurries. His attacks are relentless and in addition to that his AOE Whirlwind Kick can be quite damaging in a short period of time. It will be necessary to have healers dedicated to the raid.

On top of that he will be casting Armor Shatter on the tank, causing them to mitigate much less damage.

The simplest method of managing him is to have a 2-3 cleric CH chain on the tank and another cleric, necros, other healers watching the raid. Once your healers/necros have MGB raid healing gets easier as well. Once you get a feel for the damage output and can manage it. You're good to 25%.

Phase 2 begins at 25% and Eenton gains blind rage. This ability lowers his AC but increases his attack speed and attack power.

At this point your normal CH chain probably won't be able to keep up and your raid will need to start casting more spot heals. It will just depend on your tank and raid makeup.

25% is the best time to switch healers to fast heals and for DPS classes to blow disciplines.