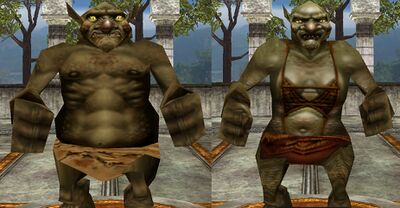 Trolls are often considered a hideous and deplorable race that carries a sickening smell. This view suits the Trolls, as they are generally unpleasant to everyone. Trolls are an immense race, at least twice as strong as the average human. They have the ability to regenerate faster than most other races. Trolls have two primary motivators: food and power. These grotesque creatures will eat just about anything.

Trolls are extremely cruel and their greed is almost insatiable. They trust no one, not even each other. Trolls also fancy that they have advanced abilities in the culinary arts, with their ability to pickle just about anything, or make a meal out of "spare parts."

Trolls generally detest the other races, including other Trolls. They tend to put up with the Dark Elves out of fear, much like Ogres do.

The city of Grobb lies within the Innothule Swamp of Antonica. The city is infested with mosquitoes and spiders, which serve as both pets and snacks for the Trolls.