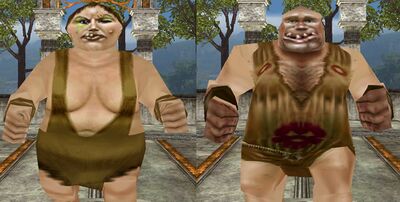 With their lumbering gait and enormous breadth, Ogres are an ominous presence. Created by Rallos Zek, these massive creatures are feared in battle for their raw strength and uncanny endurance. While not very intelligent, Ogres are known to cooperate with one another quite efficiently.

The Ogres have a twisted sense of duty that could easily be mistaken for stupidity. They are, justifiably, quite single-minded. Their thick skulls also give them a high level of resistance to being stunned in battle.

Ogres have been known to be cannibalistic, but are more partial to eating Humans, Erudites, and High Elves. Nearly all of the good and neutral races avoid them out of self-preservation. Ogres have learned to work with the Trolls, but have no love for them, and they fear Dark Elves.

The crude tunneled city of Oggok lies within the Feerrott, a jungle-like area bordering the Innothule Swamp and Rathe Mountains in southern Antonica. The home city for the Ogres is a fairly slow-paced civilization that focuses on battle training and magic to give them an upper hand in battle.