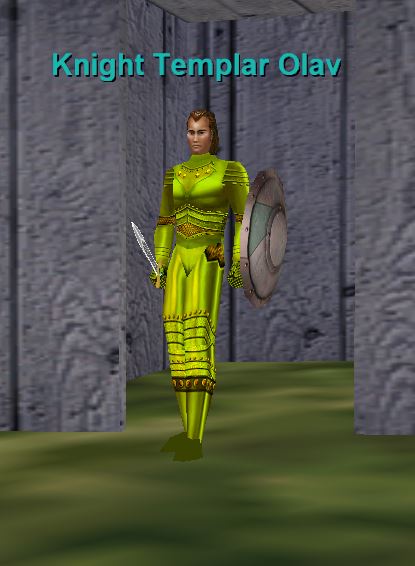 Knight Templar Olav is one Kerafyrm's Ancients and Captain. More specifically he is a Knight of the Old Order, which under the Council of Elders were tasked as guardians of lore and knowledge. Knight Templar Olav is a multi-phase fight with adds that must be dealt with and controlled from the beginning of the fight.

Knight Templay Olav says, "Mind yourself, mortal. Why do you [bother] me?"

Knight Templay Olav says, "Oh, you wish to question me? I am Knight Templar Olav, Captain of Kerafyrm's army and [Ancient] of the [Knights of the Old Order]. I travel the world on behalf of [Kerafyrm] and [Braag] to gather information on potential heretics, unconvential opposition, and basically anything else I can do to cause [chaos] in your mortal realm."

Knight Templay Olav says, "Yes, an Ancient. I am one of the original members of the Claws of Veeshan, turned to Kerafyrm's aid during the war of the Ring and Claw. I chose to side with Kerafyrm because he too believes dragons are the superior race and all others should be enslaved or destroyed. You do understand what that means for you, right?"

Knight Templay Olav says, "The weaker your realm is the more Veeshan must get involved to maintain balance. The more involved she is, the weaker they become. This serves to strengthen our cause and please Kerafyrm."

Knight Templay Olav says, "Braag is the General of Kerafyrm's army and leader of the rebellion. He believes the war between the Ring of Scale and Claws of Veeshan to strengthen his cause thus he wants to continue causing havoc anywhere he can that results in either of them being involved. Their reluctance to work together is how Kerafyrm was able to grow so strong."

Knight Templay Olav says, "The Knights of the Old Order were originally guardians of lore and knowledge within the Council of Elders but the entire order sided with Kerafyrm during the rebellion. We retain our name but our cause serves a different leader now."

Knight Templay Olav says, "Ahh, yes, the prismatic warlord himself, Kerafyrm. Once we free Kerafyrm from the Sleeper's Tomb all hell with break loose on your precious planet. Nothing will stand in our way as we make final preparations to descend upon Veeshan once and for all."

Olav starts the fight with two adds and they must be dealt with through-out the fight. Whether that means tanking or CCing them. At specific health percentages Olav will consume his adds to become more powerful and/or start using additional abilities. The adds are also leashed to Olav and must stay within a specific range of him at all times.

Phase 1 is generally best handled by assigning specific tanks to each target with your main tank on Olav and Offtank(s) on the Knights. Both Knights are fairly strong and have a good amount of HP. You CAN CC the Knights and doing so is recommended for newer and lesser geared guilds, but keep in mind the leash mechanics.

Throughout ALL phases Olav will defensively cast Pious Shield on himself (healing him when he takes damage) and offensively cast Hand of Holy Vengeance II on the tank.

Phase 2 begins at 50% and Olav gains many new stun-related abilities:

Phase 3 starts when Olav reaches 30% HP or both adds are dead. This includes Olav, below are the combinations of events:

Given the above information you have 4 possible scenarios for when Olav absorbs allies and how much he will scale is based on that.

Absorbing a weakened ally gives Olav less of a bonus than absorbing a strong ally. At full scale Olav does more than triple his base damage. Your raid composition and gear will dictate what works best for you.