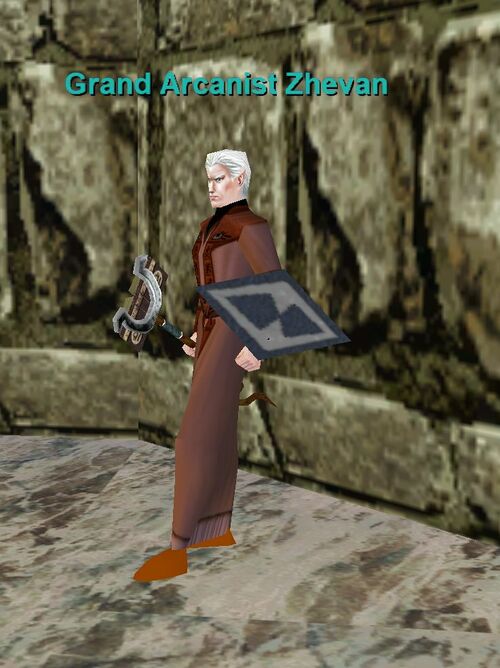 Grand Arcanist Zhevan is one Kerafyrm's Ancients and Captain. Zhevan's purpose is to test the worth of mortals for conversion (to be used as empowered Ancients) or for sport.

Grand Arcanist Zhevan says, "Greetings Adventurer, I am Grand Arcanist Zhevan. I am the $Ancient of Arcane Ways and one of Kerafyrm's Captains. My only purpose on this mortal plane is to gauge your worth before the judgment of [Braag]. Have you come to [challenge] me and test your might?"

Grand Arcanist Zhevan says, "Yes, Braag, General of Kerafyrm's army and one of his most trusted advisors. He brought us here to cause chaos and test mortals like you for conversion. A mortal could never join the army of Kerafyrm but we do enjoy watching you all fight amongst each other."

Grand Arcanist Zhevan says, "Fantastic. Your trial will take place in the arena below. Let me know when you are [ready] and I will take my position. Be warned, you only have one hour to defeat me and once I am in the arena if you come near me I will take that as an act of aggression and will attack."

Zhevan is a unique fight in that the fight takes place in an Arena. This means anyone outside the area will not be able to heal/buff someone in the arena, and vice-versa. This also means AOE spells, pets, procs, etc can hit other players and pets in the raid. Zhevan is also the first encounter that employs an ability that can one-shot a player.

Phase 1 is mainly about learning the mechanics of the fight. When Zhevan spawns in the arena he does an AOE that hits the whole raid but will not engage until someone gets within range. Once he has spawned, you have 1 hour to kill him.

Despite having melee damage listed Zhevan does not melee, is perma-rooted, and can not technically be tanked. Zhevan uses a predictable spell-casting pattern that alternates between single target spells and AOE spells (mixture of Rains and Target AE). Zhevan randomly targets players with these spells.

After casting 12 spells (6 ST and 6 AE) Zhevan will shout and emote:

At this point you have a limited amount of time to run out of range (the corners or hallway) and back off pets.

After a short cast time, Zhevan will emote again:

Anyone hit by this AOE will die instantly.

Phase 2 begins at 75%. Zhevan will grow in power increasing his spell power.

And he will shout:

During Phase 2 you will get your first set of adds at 50%. He will summon 4 elementals, one of each element. It is best to have tanks pick them up and drag them back to the safe corners to be focused down. You will see this shout when the adds spawn:

At 25% Phase 3 will begin and you will see the following shout and emote:

At this point he will increase his spell power again as well as summoning another round of adds. The adds will depop when he dies so it's best to off-tank them and focus down Zhevan.

Throughout the entire fight his spell casting sequence stays the same so get a feel for the timing, setup audio triggers, etc.