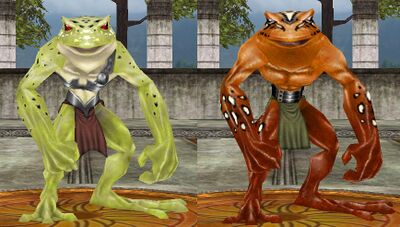 The Frogloks are a race of sentient amphibians. While they may be short, Frogloks are sturdy. They can swim underwater for long distances and can see well in the dark. They are clumsy on land as they are required to hop, but they can cross great distances with each leap.

With their dedicated worship of Mithaniel Marr the Frogloks have fast developed into a proud and principled race. Closely following his teachings and reflecting his attitude and nobility, they are known as a truthful and honest people among those who have encountered them. The other good or neutral aligned races will accept and often welcome them, but there are still some who remain indifferent or even hostile. The Frogloks have yet to prove themselves in many eyes and are viewed with the suspicion once reserved for the Vah Shir, when the portal to Luclin was reopened.

Though Frogloks are fast making progress in their acceptance with the good races; the evil still think of them as just an annoyance, and would never allow them inside or anywhere near their cities and outposts. Trolls have a great hatred of their conquerors, much less than their ogre companions and will attack a Froglok on sight without hesitation. Inexperienced Frogloks would do well to stay clear of the Dark Elf city of Neriak, the Dark Elves resent having to put up with Trolls almost as much as the Trolls do having to stay there.