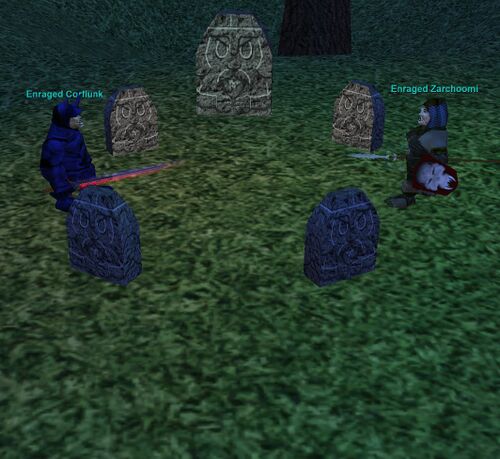 The Enraged Twins, Enraged Corflunk and Enraged Zarchoomi, are empowered versions of their regular counterparts that spawn in the zone, known for their heads being used in newbie quests, killing newbies who wander through the zone, and other shenanigans. They are fought together and must die within a similar time frame.

Go into this fight thinking you're fighting two separate bosses, but those bosses need to die at the same time. Their stats are far enough apart that the fight is a balancing act, and depending on your raid composition, will require some staggering of damage.

Corflunk is a very strong melee fighter who is immune to melee damage. He must be kited. An SK is the best, followed by Paladin/Ranger. If Corflunk ever gets engaged by a pet, he will focus the pet until dead. This can also be used as a kiting mechanic.

Zarchoomi is a shaman and casts shaman spells and is immune to magic. She will buff both her and Corflunk and eventually will begin healing herself during the fight. Due to being immune to magic you cannot dispel her buffs, one of which is likely haste. Your melee dps and pets will be focused on her.

This fight is entirely about balancing the raid damage over the fight so eventually these two die together. If one dies and the other is alive too long they will respawn their counterpart (at full health), creating a rough spot to be in for newer guilds and under-geared raids.

Once both are dead a loot chest will spawn in their spawn location.