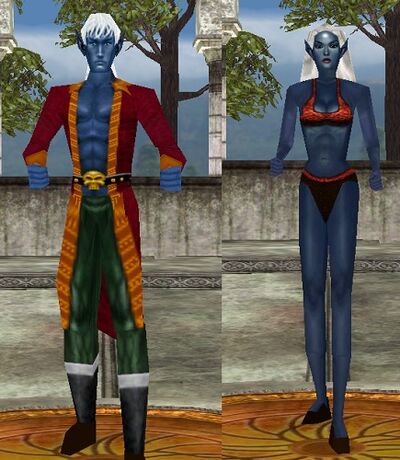 The Teir`Dal, or Dark Elves, are a twisted reflection of the Elves of light, but are just as lithe and intelligent as their cousins. Their features are often soft and delicate, though the eyes of the Dark Elves betray their darker inclinations. The Dark Elves' skin ranges from blue tones to black and their hair is most often white with some variances. They reach a height of about five feet tall.

Innoruuk, Lord of Hate, created the Teir`Dal and his hatred flows through their veins and moves their black hearts. It runs so deep that the Teir`Dal hate all, including their own kind and their creator.

The Dark Elves view all other races as inferior; tools to be used for their own evil manipulations. Most races fear the Dark Elves. The Teir`Dal would desire the fall of the rest of the Elven world, leaving them broken, eradicated, or enslaved. Though viewed as inferior and dimwitted, Trolls and Ogres are tolerated as they are useful in the Teir`Dal plans for conquest.

There is a labyrinth of evil under the Nektulos Forest called Neriak, the home city of the Dark Elves. Its entrance is deep within gloomy shadows of the woods.