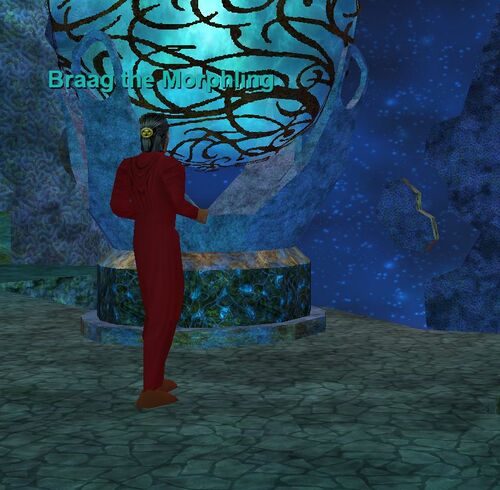 Braag the Morphling is one Kerafyrm's Ancients and as a General possesses his own army. Braag's goals are to help spread chaos and weaken the Claws of Veeshan and Ring of Scale. In addition to that, he empowers his Captains to create lesser Ancients to aid in this goal. Braag is also after strong opponents to use as training material for Kerafyrm once he is awakened.

Braag the Morphling can only be accessed once players have defeated the rest of the Classic Ancients. The first players to defeat him were rewarded with the "the Ancient" character title.

Braag the Morphling says, "Greetings, <name>. I have been expecting you. I am Braag, General of Kerafyrm's [Ancients]. You have most undoubtedly heard of me by now, and even if you haven't, you've ran into many of my [creations]. I sent them here to cause [chaos] within your realm. That chaos earns me favor with Kerafyrm, and well, no one wants to see him angry. Are you here to [challenge] me?"

Braag the Morphling says, "The Ancients are the former elder dragons of the Claws of Veeshan who sided with Kerafyrm. The council chose to destroy Kerafyrm as they felt he was far too strong and too much of a threat to be allowed to live; he chose to fight. He did not win but they also could not defeat him. Instead they subdued him and locked him away in the Sleeper's Tomb. After this battle [Kildrukaun] and the other Ancients went into hiding. I have chosen to return to Norrath and free our leader. Our [creations] help strengthen our army but they are no match for the [true] Ancients."

Braag the Morphling says, "Ahh yes, they are magnificent aren't they? Many creatures from your world, twisted and empowered to cause [chaos]. Their insatiable lust for revenge will strengthen our cause and wreck havoc on yours. I entrusted many of my [true] Ancients oversight to create and warp anything they wanted. Who knows what else we'll come up with!"

Braag the Morphling says, "The weaker your realm is the more Veeshan must get involved to maintain balance. The more involved she is, the weaker they become. This serves to strengthen our cause and please Kerafyrm."

Braag the Morphling says, "The True Ancients are the ones whom defected from the Council of Elders and chose to follow Kerafyrm instead of Veeshan. There are many more Ancients not including the ones that have simply been empowered to aid our cause. You have met a few of them already. Eenton, Zhevan, and Olav are three of my most trusted Captains and I promise you'll see them again."

Braag the Morphling says, "Kildrukaun is the reason Kerafyrm is alive and our cause exists. He was the elder that chose to support Kerafyrm and manipulated the Council into believing that Kerafyrm would help unite the Ring of Scale and the Claws of Veeshan. So by the time the Council figured out what was really going on Kildrukaun had already recruited an army of rebels to aid Kerafyrm should anything happen. Kildrukaun shall remain in hiding until the time is right for him to return. His presence would draw far too much attention."

Braag the Morphling says, "Excellent. I have been waiting for this moment. I pray you provide a suitable challenge. Are you [ready]?"

Braag the Morphling shouts, "I will consume your soul!"

Braag will depop and respawn as a random Phase 1 morph.

Braag the Morphling calls Shadowspine home and it is the first custom zone created for Clumsy's World. The entire zone is custom-scripted and employs a number of fun mechanics as well as mechanics designed to prevent abusing and cheesing the final encounter.

Braag is the first fight that employs a truly random design. Over the course of Phase 1 Braag will take many different forms and always random in order. This sometimes means he can choose one form multiple times and sometimes means you may not see a form in many clears.

Phase 1 consists of 5 fights basically. Each fight is 20% of Braag's total hitpoints (approximately 100,000 ea). Each time Braag falls 20% he will change forms and drop aggro. It is best to take this phase slow (unless needed) to allow plenty of time to control the fight and let tanks maintain aggro.

Each form has its own strengths and a brief description is listed below:

Any time Braag changes forms he will emote:

Phase 2 when Phase 1 Braag dies. He will respawn, fear the raid, and shout:

Braag the Morphling shouts, "Well that was fun! shall we begin?"

Phase 2 Braag is a good mix of his phase 1 forms in terms of melee damage and defenses but drops all spell cast in favor of an AOE lifetap proc and a single target lifetap proc on the tank. He will also summon four adds three times.

Phase 2 is more about testing your ability to sustain in a longer fight since by this point lesser geared raids are probably hurting for mana and things are getting tight.

At 70%, 50%, and 30% he will summon 4 random undead adds. It's best to let tanks pick these up and then focus them down. They are not overly powerful but can overwhelm casters.

At 5% he will depop, shout, and fear the raid. Shortly after a loot chest will spawn in the corner. Congrats!

Braag the Morphling shouts, "Until next time..."