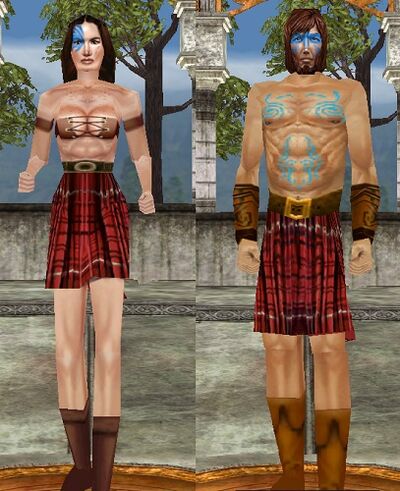 The hardy race of Barbarians, or Northmen, use their wisdom and formidable brawn to defend honor and justice. Their magnificent stature is a sight to behold; even more so when it is unleashed in battle. Barbarians are one of the tallest races to walk the lands of Norrath.

As a tribal culture, Barbarians are a little rough around the edges when it comes to interactions with other races. Even the Barbarians' mannerisms and features have a rugged quality.

The Barbarians consider themselves superior to other inhabitants of Norrath, particularly the Teir`Dal and Erudites, which are viewed as pathetically weak. Barbarians have a special place in their hearts for the Dwarves of Kaladim whom they view as steadfast and brave. The high quality of Dwarven mead may also have some influence on the cordial relationship between the two races. Ogres, Trolls, Dark Elves, and the other evil races are hated, as they directly oppose the Barbarians' sense of justice.

Barbarians live in the frigid city of Halas, nestled amidst the icy peaks of Everfrost in Northern Antonica. The city is rather rudimentary, but serves the needs of the Barbarians that call it home.

Barbarians, Halflings, Ogres, and Trolls all consume food and drink slightly faster than other races.